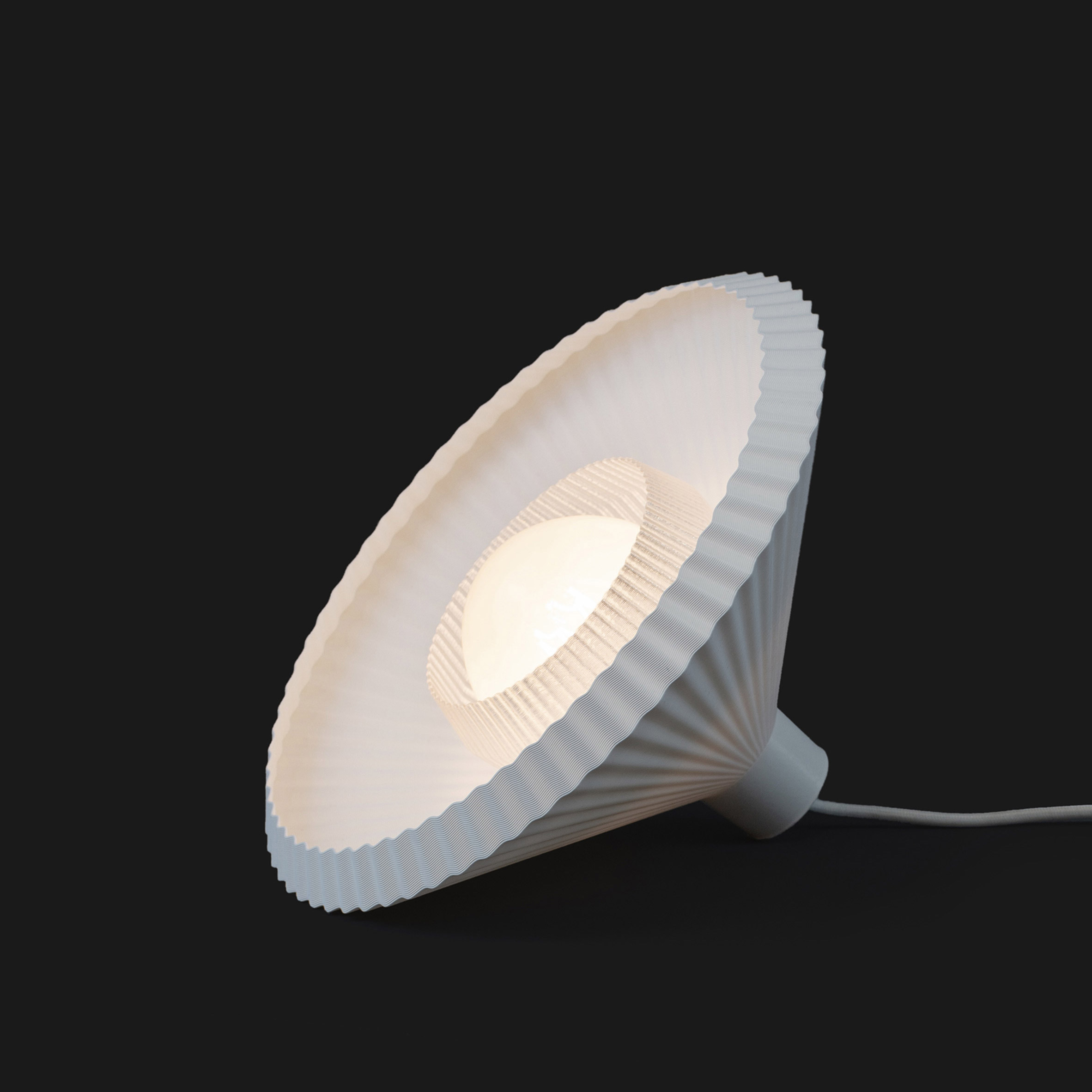 London-based lighting brand Plumen has partnered with 3D-printing specialist Batch.works to develop a range of shades for its LED bulbs that are printed on-demand using recycled plastic.

Batch.works and Plumen developed the collection of five lampshades in an effort to confront issues associated with waste plastic.

The shades are produced at Batch.works' east London workshop using plastic recycled from water bottles, fridges and other sources of plastic pollution.

Each lampshade was developed to fit one of the designer low-energy lightbulbs produced by Plumen, which was founded in 2010 by Michael-George Hemus and Nicolas Roope.

The first two designs by French studio Bold and German product designer Matthias Lauche launched in November 2019, with the remaining shades set to be unveiled in 2020.

The lampshades are printed using a filament sourced from Amsterdam social enterprise Reflow, which recycles and repurposes waste plastics.

Printing the products to order reduces the amount of waste produced, and the lampshades can be returned to the manufacturer for disassembly and recycling at the end of their lifespan.

"To Plumen, 3D-printing is a very exciting opportunity for lighting," said Hemus, "because it allows shapes and forms that are not possible otherwise."

"More importantly, there is very little waste compared to traditional methods," he added. "Products are made to order, from recycled plastic bottles, and at the end of their lives they can be recycled once again. It's a sustainable vision for the future."

Plumen pioneered the development of designer alternatives to standard low-energy lightbulbs with products such as its Plumen 001, which won the Design Museum's Design of the Year award in 2011.

The company's founders announced earlier this year that it is to cease production of the bulbs and is currently looking for a buyer to take the business forward.

In the meantime, this partnership with Batch.works demonstrates a commitment to furthering the appeal of sustainable lighting solutions through good design and a circular manufacturing process.

"We believe that thinking more carefully about what materials are used and how things are produced is key to combating short-termism," said Julien Vaissieres, the former architect who founded Batch.works in 2016.

"That's why this kind of collaboration is so promising. We believe 3D printing can be scaled to a wider variety of products, and become a practical manufacturing method for the future and that's what we want to achieve."

The Ribbon design by Bold encircles Plumen's Wilma bulb in a continuous fluid surface that folds in on itself to create a double-layered form.

The ribbed outer surface resembles a piece of fabric draped around the bulb, with an opening providing a glimpse of the light source when viewed from one angle.

Matthias Luche's Neo shade is based on the geometric forms of the art deco era. Designed to fit and frame the Plumen E27 bulb, it features an outer and inner shade that can be specified in different colours.

Since 2010, Plumen has consistently developed new bulbs and shades that fit with its ethos for producing sustainable lighting design.

These have included a shade shaped like a hat brim, a customisable chandelier kit, and an LED light with a gold-coloured inner diffuser.

The post Plumen and Batch.works launch 3D-printed lampshades made from recycled plastic appeared first on Dezeen.