Our excitement for today involved relocating a bird nest.  A darling Eastern Phoebe was spending a lot of time on our deck rail. 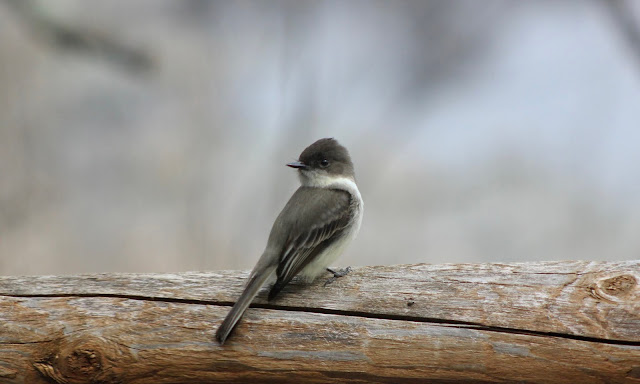 They like building nests under the overhang of the house.  We have three nests right now that I didn't catch in time.  I checked often but this afternoon I saw her fly in directly above our patio door.  It was the worst possible choice because with us going in and out and disturbing her plus I didn't want bird poop dripping down the screen.  I put on gloves, a hat and got a small shovel.  I took down the nest, but to my surprise it had four phoebe eggs and a cow bird egg in the nest. 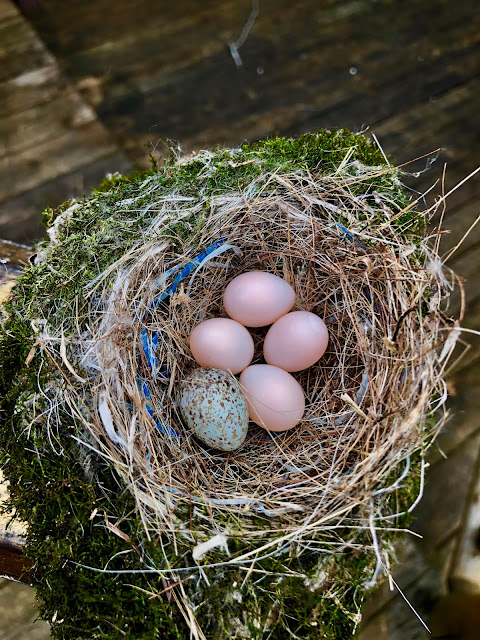 I have no idea when she built that nest and how she and a cowbird laid those eggs without me noticing.  Mike's chair is right on the other side of the door and he hadn't noticed her either.  I relocated it to another spot not too far away and under cover, however Mike said the phoebe eggs or the babies would not have survived anyway because when the larger cowbird hatches it either forces the babies out of the nest or they won't get enough food to survive.  The weird part is that it's illegal to remove a cowbird egg from a nest.  I hope this Eastern Phoebe doesn't try to build another nest in the exact same spot as before.  We may have a little conflict of wills if she does, but she doesn't know who she's dealing with and I will win.

I will monitor the nest to see what happens, but I did my best.