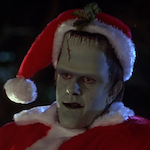 I really enjoyed Rob Zombie’s love letter to THE MUNSTERS earlier this year, and it even got me to check out the o.g. Munsters movie MUNSTER GO HOME!. But Zombie’s movie did not go over well with or cause much of a splash among the general public, and now there’s this Netflix show Wednesday, based on Munsters rival The Addams Family, which is actually a huge streaming hit (and which I have to admit I like even more than THE MUNSTERS). So it kinda looks like a Photon Warrior to Lazer Tag situation for ol’ Herman and Lily. Or Gobots to Transformers. Or IRON EAGLE to TOP GUN.

Still, I am making this The Year of the Munsters by watching a Munsters Christmas special as part of my holiday festivities. THE MUNSTERS’ SCARY LITTLE CHRISTMAS (not to be confused with the weird New Zealand Christmas special THE MONSTER’S CHRISTMAS) is a 1996 Fox TV movie. The Munsters are entirely recast from the 1995 Fox movie HERE COME THE MUNSTERS, but they carried over an uptight neighbor character named Edna Dimwitty, played by Mary Woronov (DEATH RACE 2000), so I guess they’re connected. 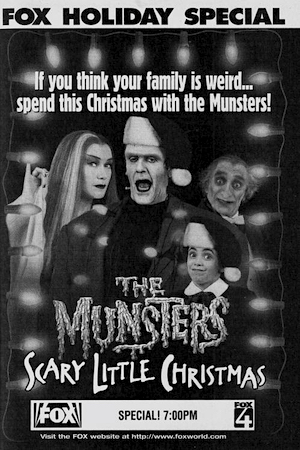 The All New Munsters are well cast. Sam McMurray (THE WIZARD, STONE COLD, ADDAMS FAMILY VALUES) plays Herman, doing a decent impression of Fred Gwynne’s version. Ann Magnuson (TEQUILA SUNRISE) plays Lily, which seems particularly inspired, but her performance is pretty subdued. The old comedian and character actor Sandy Baron (who had previously been on The Munsters Today as Yorga) plays Grandpa. His version comes off more sleazy, and I like that his face is so drastically different from Al Lewis that the makeup seems like more of a reinterpretation than an imitation. Bug Hall (Tobe Hooper’s MORTUARY) plays Eddie, and he’s actually the most impressive to me, because I know him from very broad humor in THE STUPIDS and I know he played Alfalfa in the LITTLE RASCALS movie, but he plays Eddie Munster completely straight. It gives a bit of grounding to a cheesy movie, since the story revolves around him being too homesick to be happy about Christmas.

The most specifically ’90s character is of course Marilyn (Elaine Hendrix, ROMY AND MICHELE’S HIGH SCHOOL REUNION), because she’s supposed to look like a normal young woman of the time, so they gave her hair and outfits that would’ve fit right in on Beverly Hills 90210 or something. She seems too old to still be living with her aunt and uncle, but she’s probly supposed to be a teen, so I guess that’s pretty 90210 too. (Coincidentally, Hendrix was on some episodes of the reboot of 90210 in 2010. I assume she was playing an adult, though.)

The family is trying to get Eddie excited about Christmas, but he’s too sad. Herman determines that the way to his heart is to buy him a good present (he wants the Marquis de Sad Torture Playset), and Marilyn decides it’s by involving him in the community. Herman’s plan requires more money than he has, so he goes to his boss at the funeral parlor (a one scene appearance by Bruce Spence, ROAD WARRIOR, MAD MAX BEYOND THUNDERDOME, DARK CITY, THE MATRIX REVOLUTIONS, STAR WARS EPISODE III: REVENGE OF THE SITH, I FRANKENSTEIN) to ask for a raise. No dice. 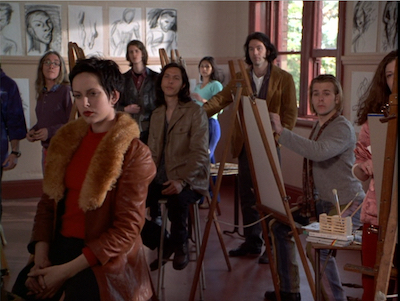 So there’s a comical montage about Herman doing different gigs for extra money. Most notable is his stint as a figure drawing model. The very ’90s-looking art students seen at the left here are about to scream and flee in horror when he disrobes – I’m honestly not clear what this is saying exactly about Herman’s terrifying cock. It was broadcast TV, they had to be cryptic about that kind of stuff, I don’t care how far Married… with Children pushed the envelope.

Lily’s plan consists of getting Eddie to help her decorate the house for an annual neighborhood competition. As in many Hallmark movies, it’s very serious business with judges and stuff. Edna has won five times in a row but feels entitled to six. So this creates conflict, but of course it’s mainly a vehicle for jokes about what the Munsters would consider Christmas cheer. Their decorations include a snowman being repeatedly decapitated by a guillotine, and “Randolph the Rabid Reindeer,” who spews “real dog foam,” because “Munsters don’t skimp when it comes to Christmas.”

Eddie does his part, but is still mopey. He’s also being bullied by a gang of classic ‘90s backwards hat wearing, skateboard carrying, but also sports enjoying jock prickfaces led by Hector Barbieri (Michael Hamilton), who at least is clever enough to refer to another nerd kid as “egghead” and Eddie as “Munster Cheese” to set up an omelette joke.

The Marilyn subplot is the traditional Munsters joke that she’s considered the ugly one in the family and doesn’t know she’s hot to non-Munsters. When she goes out to mail her Christmas cards a neighbor falls off a ladder (pretty good stunt, actually), a mailman walks into a pole, and a guy crashes his motorcycle. That third guy is Tom (Jeremy Callaghan, THE GREAT RAID), who talks to her and we know she will fall in love with him because he’s the exact kind of bland hunk of spam Marilyns fall for. He’s supposed to be a cool biker and he’s in a band but the face doesn’t lie. Also he’s even less believable as a teenager than her so it’s hard to say if they’re both adults or both teens or he’s a total creep or what.

Grandpa’s way of cheering up Eddie is to use alchemy to make it snow in California, but instead he accidentally zaps Santa Claus (Mark Mitchell, INSPECTOR GADGET 2) and two elves, Larry (Ed Gale, HOWARD THE DUCK) and Lefty (Arturo Gil, BILL & TED’S BOGUS JOURNEY), into his lab. They get hung up on by the airline trying to buy plane tickets back to the North Pole (must be on the no fly list) so Grandpa scrambles to find a spell to send them back in time to not totally fuck over Christmas. 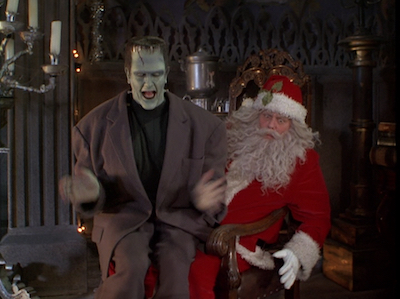 At first Santa is mad about being abducted, but he determines the Munsters are nice people, even while feeding him black widow tea and injuring him by sitting on his lap. But his elves – who by the way make lewd comments about Marilyn – are sick of having to work on Christmas, so they use Herman’s chemicals to turn Santa into a giant fruitcake so they can go hang out at a bar. (To me it looked more like a hamburger, which Grandpa later seems to agree with.)

Some of these plotlines come together because the elves go to the same bar where Tom’s band is playing. Herman goes there wearing his biker outfit, just like in the Rob Zombie MUNSTERS (though that time he was in the band). In the end the elves make up for their transgression by inventing a machine that can create any toy that Herman thinks about while looking at a catalog. Also bikers from the bar come to help with the toymaking as well as to be strapped up to Santa’s sled in lieu of reindeer. Kinda kinky.

The line in the movie that got the biggest laugh out of me is when Herman chastises Grandpa for always trying to cheat everything with magic, and Grandpa says he’s a hypocrite because he once made him conjure up the Sunday comics three days early.

“Well, I was going out of town, and Li’l Orphan Annie was in a real jam,” Herman explains.

One thing The Munsters show always had going for it is that it was from Universal so they could use the copyrighted parts of the iconic Frankenstein’s monster makeup. SCARY LITTLE CHRISTMAS goes all in on the classic monsters – there’s a Christmas party at the end with Munsters friends and relatives including a mummy, Quasimodo, the Phantom of the Opera, the Creature from the Black Lagoon, and the wolfman. You can tell the makeup artists were having fun. (Unfortunately IMDb doesn’t list the makeup credits, and I didn’t write it down. I thought the opening credits said Tony Gardner, but can’t find any proof of that.) 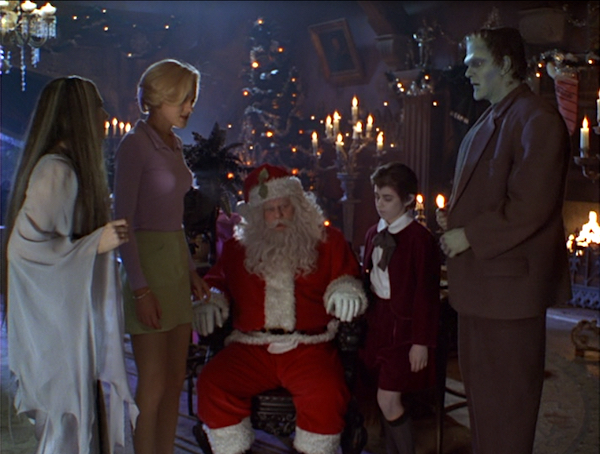 John Landis and Leslie Belzberg are credited as executive producers. I’m guessing they had the rights for an unfulfilled movie project or something. Director Ian Emes started out directing Pink Floyd videos before becoming a TV director. He’s still working – he did 8 episodes of Queens of Mystery.

The script for SCARY LITTLE CHRISTMAS is by Ed Ferrara & Kevin Murphy. They had previously worked together on Adventures of Sonic the Hedgehog, Tattooed Teenage Alien Fighters from Beverly Hills and the Weird Science TV show. Ferrara went on to be a prolific writer for WWF and WCW, while Murphy wrote for Desperate Housewives and a couple wacky musicals (Reefer Madness: The Movie Musical, Heathers: The Musical).

THE MUNSTERS’ SCARY LITTLE CHRISTMAS is far from a great movie, but it’s a mildly amusing TV special, worthy of at least putting on in the background at Christmas time if you’re a monster person, or I guess on Halloween if you’re one of those people who thinks movies about monsters celebrating Christmas are appropriate Halloween viewing. It should go without saying that THE NIGHTMARE BEFORE CHRISTMAS had already done an infinitely more artful job at this specific monster/Christmas juxtaposition and the corny jokes it inspires, but I think there’s room in the world for more than just the one very best example of a thing. Might as well have leftovers.

The post The Munsters’ Scary Little Christmas first appeared on VERN'S REVIEWS on the FILMS of CINEMA.