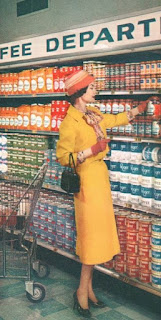 Years ago we were po'...John says we had so little money we didn't even qualify for being properly poor!  During those days we had five children, two in diapers and one of those two on formula and two adults and two dogs to feed on a daily basis.   We didn't have a garden nor equipment to do gardening and so we relied on what we could buy at the grocery for our pittance of money.  It wasn't a lot but we fed every single one of us.

Fortunately (?), I'd lived through the recession of the late 1970's and early 1980's.  In 1978, we had a major drought  and farmers went broke.  Gas prices soared.  I laugh now at the 'high' price we paid but truthfully, when you're making $2.35/hour and gasoline costs $1/gallon, it does indeed seem high.  In a largely rural area of Georgia there were a lot of people applying for Small Business Administration loans to see them through the tough period.  And then the economy of the U.S fell and I was suddenly out of work along with a lot of other folks.

This was during my first marriage and we'd already been struggling to make ends meet before I lost my job.  But I took the opportunity offered by loss of job to file for unemployment benefits and then took up my cookbooks and found every single cheap and inexpensive recipe I could possibly find.  I tried making bread for the first time.  It was a disaster and one I was not keen to repeat since it cost dearly in grocery we might have otherwise used.  But I kept on and eventually I compiled a repertoire of  good recipes that really stretched pennies.  There were only two of us and we managed well enough.

Our big Saturday special thing was to get up early, drive the byways into town seeking glass soda bottles and we'd turn them in for the deposits.  On a good Saturday we'd be able to purchase a grilled sausage dog and soda for our weekly treat.  On a bad week, we managed to buy a soda each.  No one will ever know the thrill of 'found' money in returning glass bottles for deposits any more but it was a thing back in the late 1970's.

Fast forward to a period ten years later when my husband decided to quit his job and take another.  Boy was he shocked to discover that he'd failed to take note of the salary which was $30,000 a year less than his previous position.  Well what else could we do but pull up our bootstraps and figure it all out.  Groceries were considered a non-essential by said husband.  I went back to our previous days of my unemployment and figured out how to feed us on as nearly nothing as I could.    At this point we had two children.

It was during this time that not only did I pull all my previously learned tricks out of the proverbial hat, but I also learned to glean and forage.  Gleaning is where you go into a field or orchard and are allowed to pick it of culls and anything left after it had been harvested.  Foraging is going out to the fields and woods and gathering in the wild fruits available.

What did we glean?  As it happens only peaches but I was able to gather enough that I canned 33 quarts of peaches.    Foraging netted us black berries, blue berries and wild plums each year, as well as hickory nuts and pecans that fell on roadsides (now outlawed).

As well we gratefully accepted the offerings of friends who hunted.  We planted a garden and I put up a very nice little harvest from that little garden as well as our eating fresh from it all that summer.  It was during this period that I learned the absolute value of a pantry and freezer filled during the feasting seasons of life.

Let's get back to John and I...Several years down the road, we met, married and made our families into one family.  There was no pantry and no freezer except the one above the fridge.  We managed with care.  And then, I ended up resigning my job and we lived on one salary.  It was a personal crisis after a rather hellish two years this time that led to unemployment but there were mouths to be fed and only a small amount of money. My ex thought child support was optional and Child Support Recovery apparently agreed with him.  We made up our minds we'd live on what John made and if my ex ever paid child support we'd take it as a blessing.

And so, I pulled out all those old tips and tricks and began again to figure out how to stretch the food dollars to the maximum while spending the absolute minimum.   John had never heard of gleaning or foraging and was against the practice of it.  We didn't have space or equipment to garden.  Yet  I was successful.   We didn't go hungry.  I did well with the task, though I often felt sick with tension as I shopped so very carefully each pay period.  But I put good food before my family. I know this because my children still ask me to make foods we ate in those toughest of days.  And it wasn't just my family we fed at that time.  It wasn't at all unusual of a routine evening to have neighbors or friends stop in and join us.  Our table for 7 often stretched to be a table for 12.   On a budget that would barely feed four.

Again, during the feasting times, those rare occasions when child support came in, we stocked our pantry as much as we could.  We took a portion of a tax return to buy a small freezer and filled it.  The value of the pantry was proven yet again.  During yet another recession at the very time we were doggedly determined to get out of debt,  with the previous experience at preparing meals on a tight budget I'd learned over the years, we managed nicely.

This year two things happened.  John retired.  We planned to withdraw retirement funds but knew we'd have a spell of living off less.   Then the stock market crashed.  We had to postpone indefinitely withdrawing any retirement funds.    Corona Virus came to the U.S.   Store shelves were/are wiped clean at times.

We don't know how long this will last but we do know that the economical effects of these past two months will be felt for a long time.  Too many people were unprepared for this sort of lean time.  Too many are unable to plan meals at home, much less make frugal and nutritious choices, or plan well using what they can find. I suspect a lot of dried beans and rice fill pantries at present and no one has a clue what they might make from those two humble ingredients. Many have no idea how the odds and ends of food items can be used as well as the best parts to create a satisfying meal experience.

I plan to focus on meals just now in all aspects...Meals are more than just food for the body.  They very often create memories and strengthen the people who gather about the table into a family unit.
(C) Terri Cheney