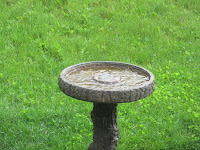 That was my day today.  I woke to rain pecking at the window over my head and a bit of thunder rumbling in the distance.  At one point the drops were so big that they made bubbles in the birdbath.  It stopped raining off and on and finally quit for good around lunchtime.


So I worked on the scene I wrote on Wednesday, transcribing it from my Alphasmart to a Word document, and adding a bit more to it.

Then I took my knitting outside and sat on the patio enjoying the light breeze and warm sun.  Yeah, the chair was dry by then so I probably could have mowed but the urge had passed and I'd made up my mind that tomorrow's the day. 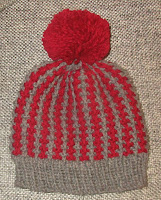 At Friday Knitting, Zoom edition, tonight I made a giant pompom for the slip stitch hat.  My friend, MW, collects items for a charity auction in the fall and that's where this hat is headed.


Mona sat on the patio watching the sunrise behind her send pastel shades of rose and gold in streaks across the sky to paint the tops of the iron gray clouds crouched on the western horizon behind the little offshore island. She watched the curl of steam rise from her cup of mint tea and smiled at the drops of dew that trembled on the ends of the palm fronds. Tiny emerald and brown lizards splayed themselves on the stucco wall, did their morning push ups, and displayed their orange throats at each other. The vivid red and yellow verbena that screened her patio from the neighbor's view reminded her of early morning at a busy airport with the squadron of black and iridescent green hummingbirds swarming around jockeying to be first to sip the nectar from each tiny trumpet. She mourned the fleeting moments of perfect stillness and harmony she felt as she sat there every morning that were so quickly lost when the maid Yana arrived.
The large robin-sized bird perched on the garden gate glaring at Mona. She could not get over how vivid orange the bird's breast was and how the contrast of its black head feathers made the orange even brighter. There was a yellow ring around the shiny black eye that gave the bird a horror-film look. Mona studied the elegant looking creature as she sipped her tea and toyed with the toast that Yana set before her. "You see the Trupial, Miss?" Yana asked. "I wondered what it was--a Trupial." As if responding to its name the bird stretched its neck, threw its head up, and gave a loud clear call, one note that it flung at the blazing morning sun like a gauntlet. Almost before the note stopped ringing in the heated air there came an answering call from a nearby tree. Yana laughed. "Just like a man. He calls her to come to him." She cocked her head to the side. "You watch," said the younger woman, "pretty soon a female will come and flutter down beside him." Sure enough another Trupial flew over and landed on the gate. "How can you tell males from females?" Mona asked. Yana crossed her arms and shook her head. "Easy. You see he is all duded up; she is just a little drabber. I figure to soothe his ego." The women looked at each other and burst out laughing at the universal truth of those words. The Trupials flew away unfed.


The weather today was perfect, once it stopped raining, warm and sunny with a temp in the mid-70s.  Too nice to ruin getting all sweaty.  I'll save that for tomorrow.
--Barbara