This afternoon I finished making the last four masks for the taproom staff.  I think I'm getting faster at making them and I know that the available colors of bias tape are getting slim.  I checked on Joann Fabrics' website and none of the colors I'd like to order are in stock.  Oh well, if I have to make more the ties will be less color coordinated but they'll still tie.  Beggars can't be choosers.

This morning I went all the way across town (must be all of five miles) to Lindsley's Greenhouse to pick up my plants order.  Look, plants!  If it hadn't been raining all day I'd have gotten things planted but I'm determined to plant tomorrow even if the soil in the pots and planters is soupy mud.  It's time to get things in the ground and growing. 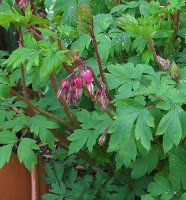 The bleeding heart is starting to bloom.  See the tiny pink heart shaped flower with its droplet dangling? 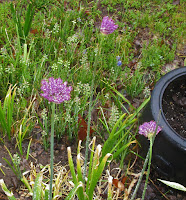 The alliums are popping out too.  I leaned out of my window to take the picture so that the flowers didn't get lost in the brick pattern on the house. 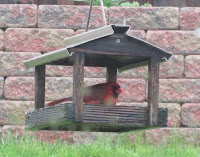 All of the birds came to the feeders today but the Cardinal was the only one that stuck around long enough for a picture.  I didn't blame them one bit.  It was a crummy, windy, rainy day, not fit outside for neither man nor beast.

After finishing the Baktus scarf I was out of knitting so I cast on May Preemie Hat #1 yesterday.


That small comment, that sympathetic validation of her feelings gave Mona the strength to regain her composure.  She dabbed under her eyes with a corner of her napkin, cleared her throat, and took another sip of wine.  She caught sight of the hovering waiter.  “We should order.”  Her hand was trembling so when she reached for the menu that, embarrassed, she dropped it back in her lap.
“Shall I order for both of us?” Susan asked.
Mona nodded thinking that it had been years since someone had understood how she was feeling and did not criticize her for it.  It was a relief.
It took nearly all of Susan’s self-control, but she let Mona get control of her emotions, sipping her wine and gazing out at the boats passing buy.  She decided that their first meeting was just too soon to start sniping at the way Jack treated Mona.  Besides until she had earned Mona’s trust taking pot shots at Jack would probably force Mona to defend him and that was the total opposite of Susan’s intent.
Soon enough Mona’s chin came up and she had even mustered up a watery smile.  “This is a beautiful spot,” she said.  “
Yes,” said Susan, “It is one of my favorite restaurants on the island, at least for the view.  The food is not quite as good as it was when the previous owners were here, but I like the décor better I think.”
“What was it like before?”
“Oh, tacky tropical, I think you would call it.”
Mona giggled and put her fingers over her mouth so only her twinkling eyes were visible.
“They had dusty old fishing net stretched across the ceiling, glass net floats and garish tin fish hanging from it.  There were every sort of bamboo and tin and seashell fish sculptures, if you can classify such amateurish things as sculpture, arrayed all over on the tops of the walls and on the tables, which are small enough as they are.  It was just too much, too busy.  And everything walls, tables, everything was dark stained or painted.  I find this new white and streamlined look very restful.  Plus, I think it makes the view the feature rather than all the kitsch.”
Mona looked at her as if she had discovered a treasure under an old bucket.  She had never imagined Susan, proper, British Susan to have such a wicked sense of humor.  Laughing had removed the last of Mona’s sadness for the moment, so the women enjoyed a long lunch getting to know each other a bit.  For Mona it had been years since she had had a girl friend to talk to and laugh with so this freedom to speak her mind was like a vacation.  She had forgotten what it felt like to say what she wanted without having to stop and think first.
For her part Susan was happy to see the change in the younger woman, to see her shoulders relax and for the caution to leave her eyes if only for the duration of this lunch.
After they had finished their meal, they crossed the street and sat on a bench overlooking the ocean.  A line of sailboats moored there intrigued Mona when Susan told her that they were transient boats sailed by people who were working their way around the Caribbean for the summer or people for whom that boat was their home.  The idea of all that freedom from being tied to land was a new and interesting one for Mona.
Mona and Susan sat on that bench for a long time just gazing out to the horizon talking about places that Susan had lived, about dreams they each had achieved and those they had not, deep things and shallow things, some that neither had told to anyone else.  Mona wondered aloud why she found it so easy to say things to Susan.
“Because I am a relative stranger.  It is the same reason I feel comfortable saying some of the things I have said to you.  We do not know each other enough to have judgments about each other, we are building a relationship, a friendship, so we are piling up our history for each other.”
“What an interesting idea,” Mona said.  “You believe that we are speed building a friendship?”
Susan nodded.
Mona looked puzzled.  “Why?” she said.
Susan looked away from her to the small uninhabited island offshore from where they sat.  She dropped her gaze to the tiny waves lapping at the rocks at the base of the seawall in front of the bench they occupied.  Finally, she looked back at Mona, looked her straight in the eyes.  “Because I think you need a friend.”


I was pleasantly surprised when I got on the scale this morning.  I was convinced that I'd blown it all last week and would have a gain or, at best, stay the same but I lost weight again.  That tells me that I'm doing the right things to stuck to the plan well enough to enjoy "treats" and still lose.  Maybe I can keep doing this.