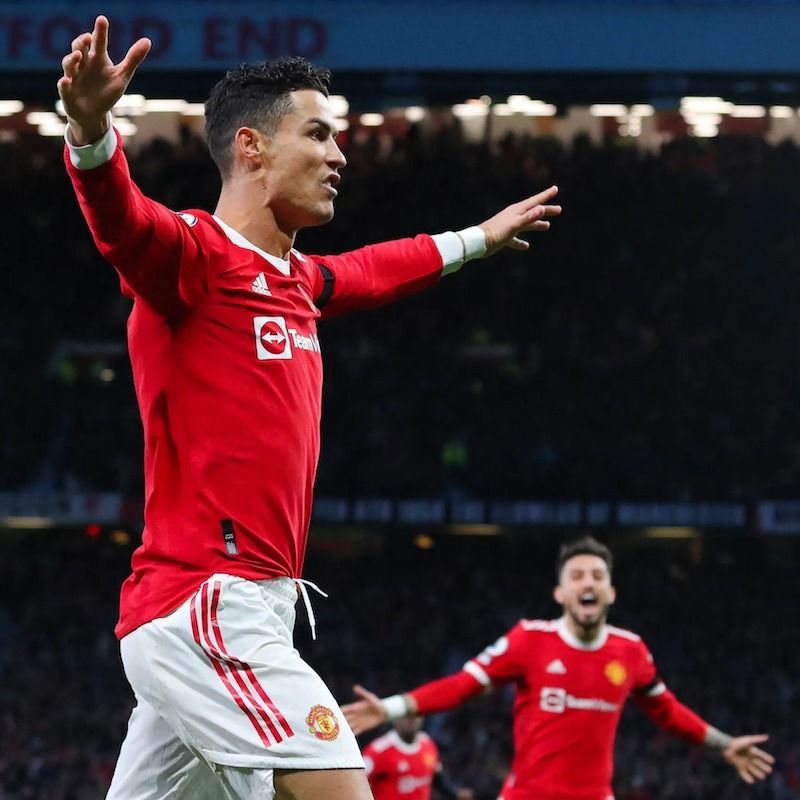 Football star Cristiano Ronaldo has officially parted ways with Manchester United. This announcement came in the early hours of November 23, on the back of explosive remarks Ronaldo had made about his club in an interview interview with British broadcaster Piers Morgan. Cristiano Ronaldo — one of our generation’s most decorated players with an astounding list of footballing records — tore into his club with scathing words about feeling pushed out and betrayed by his teammates.

The Portuguese striker had clashed with Ten Hag just last month when he refused to come on as a last-minute substitute during his team’s match against Tottenham Hotspur. Displeased about being left on the bench, Ronaldo had stormed down the tunnel at Old Trafford stadium even before the final whistle — a move that led to him being slapped with several penalties including a fine and being made to train alone, away from his squad until after their next game. During his interview with Morgan — of which the full 90-minute session will be aired on November 16 — former Man U interim boss Ralf Rangnick wasn’t spared either. Ronaldo criticised his capabilities, citing: “If you’re not even a coach, how are you going to be the boss of Manchester United? I’d never even heard of him.”

Regardless of whose side you’re on, and what you make of the whole Manchester United drama, one thing is for certain: Cristiano Ronaldo remains one of the brightest soccer stars right now, and we can’t wait to see him leading Portugal at the FIFA World Cup in Qatar, which kicks off on November 20. Barriers are dismantled and records are shattered when the 37-year-old soldiers on, defying any disparaging narrative that he is nearing the twilight of his phenomenal career. When he netted a hattrick against Tottenham Hotspur on March 12 2022, CR7 became the official outright top scorer in men’s football.

Not bad for someone who was once admonished in a training session for not delivering end products to complement his bag of tricks. “He should be in the circus; he shouldn’t be on the pitch” – a sudden choleric outburst attributed to Manchester United’s legend Ruud van Nistelrooy.

While pugnacious discourses will rage on whether Ronaldo is the best-ever football player – some don’t even consider him to be the best of his generation thanks a pint-sized wizard called Lionel Messi – the latest and perhaps the most coveted goal-scoring record will surely immortalise his stature in football. Along the way to cementing his rightful place in football, he has also rewritten record books on numerous occasions.

The ruthless goal machine from Madeira has left his indelible imprints anywhere his career has taken him. He has won 32 trophies in total, including seven domestic league titles, five UEFA Champions Leagues, one UEFA European Championship, and one UEFA Nations League.

Apart from his peerless determination and the demands on standards set forth on himself and his colleagues, he has shown throughout his relentless pursuit of glory that his body can withstand the rigours of modern football. Where others hit their prime before fizzling out, he has been at the height of his powers closing over a decade.

Barring any premature end to his glittering career, Cristiano Ronaldo could easily still add to his string of records — which even includes being the second most-followed account on Instagram with 517 million followers as of December 17 2022 (read more here).

What other football-related records does Cristiano Ronaldo of Manchester United hold?

His hat trick in the pulsating English Premier League game against Tottenham Hotspur on March 12 2022 elevated him to be the outright all-time top scorer in his senior career as recognised by FIFA at 807 goals. Josef Bican was the previous holder of the prestigious title. Ronaldo’s record won’t be under threat anytime soon. Only one currently active football player has managed to crack the top 10. His name? Lionel Messi at 759 goals, who is three years Ronaldo’s junior.

Ronaldo kick-started his senior career at Sporting Lisbon, scoring five goals, prior to a transfer to Manchester United. He has scored 144 goals over two stints, sandwiching 450 goals at Real Madrid and 101 goals at Juventus. With the 2022/2023 season still underway and with his reported contract still having over a season to go, he is poised to add to his already unassailable tally. He has scored 115 goals for Portugal.

Ronaldo’s lethal strikes have put him well clear of second place (47 by Pauleta). A talisman to his country, Portugal under his stewardship have won one UEFA Nations League (2018/2019) and one UEFA European Championship (2016).

Ronaldo became the first player in history to score 10 hat tricks for a national team on 12 October 2021 in Portugal’s 5-0 victory over Luxemburg.

Thanks to a hattrick in a 3-3 draw against Spain in the 2018 FIFA World Cup, he became the oldest player to achieve such a feat in the World Cup at the prime age of 33 years and 130 days. 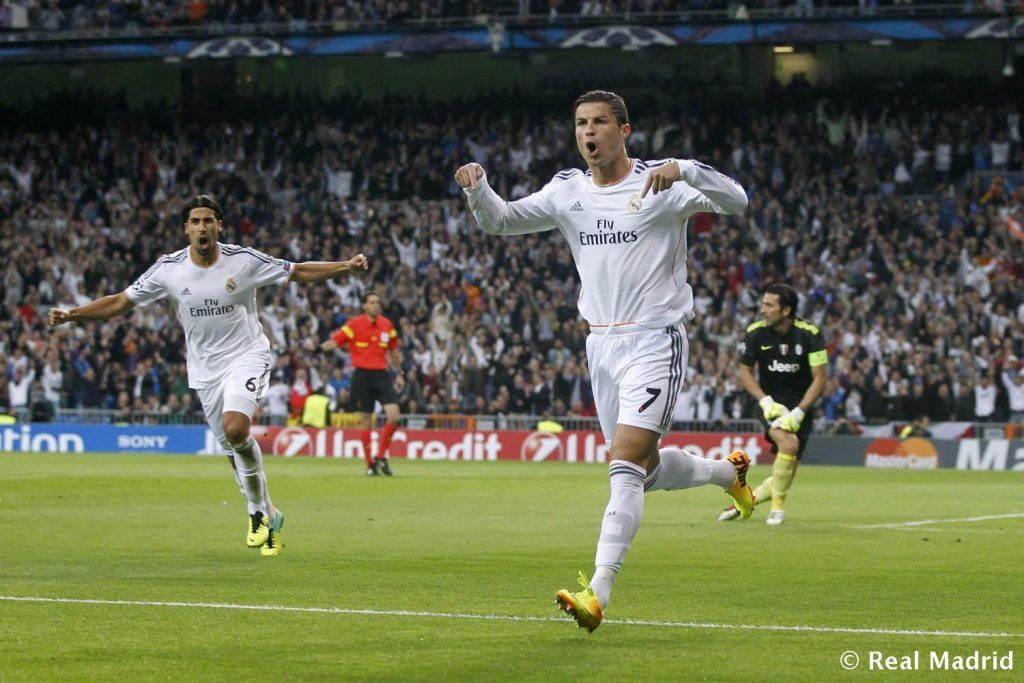 Since Real Madrid shattered the then world-record transfer fee to pry him away from Manchester United for £80 million in 2009/2010, Cristiano Ronaldo has gone on to reach greater heights. Though adored and revered by the Manchester faithful (the red half), Ronaldo is every bit a Madrid (the white half) legend.

Between 2009 and 2018, he netted 450 goals (which you can watch here) to become the outright top scorer of Real Madrid at a scarcely believable frequency of more than one goal per match on average. 311 of which arose in La Liga – the most by a Real Madrid player.

He redefined prolificacy in 2014/2015, scoring 61 times in all tournaments while representing Real Madrid. The same season, he etched himself into yet another Real Madrid record with 48 goals in a single La Liga season.

Ronaldo can boast he scored the most hat tricks in La Liga history at 34 times.

For over a decade, the coveted award bestowed to the best football players was an annual oscillation between Messi and Ronaldo. It became a barometer for the intense rivalry between two of the greatest players. While Messi can lay claim to winning it the most at seven, Ronaldo trails at five, winning in 2008, 2013, 2014, 2016 and 2017. He received the most nominations at 17 times. The first came in 2004 – a testament to his consistency and longevity.

The most European Golden Shoe wins by a European player

The golden boot award is bestowed upon players who have scored the most domestic goals in the top division of every European national league. While his Argentine nemesis Messi has won it the most at six times all while playing for Barcelona, Ronaldo proved his worth to the clubs he played for by topping the continental goal-scoring chart on four occasions – 2007/08 (Manchester United), and 2010/11, 2013/14 and 2014/15 (Real Madrid).

No one defines UEFA Champions League quite like Ronaldo

Simply put, the best goal scorer UEFA Champions League has ever borne witness. His statistics speak for themselves. Five times Champions League winner, including three consecutive years with Real Madrid, Ronaldo is also the all-time leading goal scorer of the tournament with 140 goals to his name. Messi and Robert Lewandoski who are respectively second and third in the record book “only” amassed 125 and 85 goals as of 16 March 2022.

Apart from the 21 goals with Manchester United, 105 with Real Madrid and 14 with Juventus, Ronaldo proved to be an able provider. He tops the assist chart with 42. Nineteen of his goals came from penalties excluding shoot-outs – the most penalties ever scored.

Cristiano Ronaldo also played in the most Champions League finals at six, humbled only on one occasion, a 0-2 defeat at the hands of Barcelona while representing Manchester United in his initial stint in England, back in 2008/09.

With that, he has won the most matches in the Champions League at 115. The latest came after Manchester United foiled Villarreal away in Spain 0-2 on 24 November 2021. Only one other player surpassed the century mark and he was Ronaldo’s teammate at Real Madrid – Iker Casillas.

Cristiano Ronaldo and Messi share the record of scoring the most hat tricks in the Champions League history at eight apiece.

The best player Europe has ever produced?

Arguably. You can certainly make a case for Cristiano Ronaldo thanks to his extraordinary records. While representing Portugal in the UEFA European Championship, he has scored 14 goals across five tournaments. No one else cracks 10. In all international matches combined, he has scored 115 times, also another record. He has also made the most international appearances for a European male at 184.