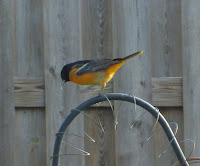 There's a male Oriole that keeps coming back for sips of grape jelly a few times a day.  He's so bright and beautiful, I can barely look away.  One of the squirrels discovered the dish of jelly and climbs up for a snack.  I chase it away when I catch sight of it but I have no illusions that I'll chase it away for good. 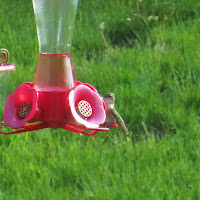 I caught sight of the female Hummingbird this morning too.  She's so small and delicate it seems like she can't be a real bird.  She looks more like a big bug.  I got a text from DD this afternoon that she saw a Hummingbird at her feeder in KY for the first time.  A banner bird day for her! 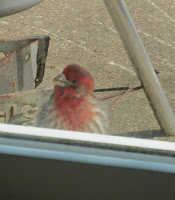 This little House Finch watched me do yoga this morning.  It sat on the step and gazed in the window.  I'm guessing that it was watching its own reflection but I thought it was pretty funny for it to stay there for as long as it did and not be chased away by my flailing around.  House Finches have a taste for grape jelly too but I don't begrudge them their share. 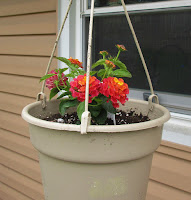 I need to keep an eye on the
lantana pots because the Hummingbirds visit it too.  My grandma used to grow lantana.  I remember liking the colors and shapes of the flowers when I was a kid. 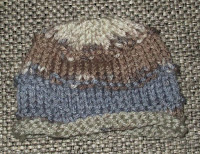 I sat on the patio this morning and finished the May Preemie Hat #1.  It was lovely to sit out in the sun listening to the birds and knitting.

Then I cast on a slip stitch hat in some leftover bulky yarn.  In one more round of the ribbing (maybe two) it'll be time to add in the second color and start the pattern part.  I'm using red as the second color (what a surprise), I think the gray and red will look nice together.


On her way out of town Mona decided to stop at a gallery to kill time until four o’clock.  Maybe I will take up painting, she thought, standing in the mildew-y smelling blast from the Cinnamon Gallery's overworked air conditioner. I could not be any worse than this guy. She bent forward and squinted at the artist's signature smeared in the lower right corner of the framed canvas. Winfred Danie it read, written in what looked like a child's handwriting. Was Winfred Danie someone influential's nephew, acclaimed as the family prodigy, and given a show in return for a juicy donation? Mona shook her head and glanced around looking for a sheet describing the art. There it was a haphazard pile of poorly Xeroxed pages flung in a cut-down corrugated carton.
Very chic, she thought as she stooped to pick one up. She frowned at the grainy black and white photo of the artist placed at a slight angle atop the sheet of text describing him and his works. She had met this man at one of Jack's influence-currying cocktail parties. The man in the picture had been quite convinced that Mona herself was on the appetizer menu. It had taken the better part of a Mai Tai poured down the front of his slacks to convince him otherwise.
Susan stopped in at a gallery on her way home too.  She had need of a gift for her daughter-in-law Elke’s birthday next month.  Instead of the Cinnamon Gallery on a side street in Playa she went to the Windward Gallery in Antriol across the island.  Susan stood in the gallery staring at the framed and matted photos. She did not go to the galleries on the island often. Most of the art for sale was patently made for sale to tourists. Tourists who most often left their good sense--and good taste too she thought--at home. What seemed to sell best were naive paintings of colorful flowers, palm trees, and romantic depictions of island life. Too many of them to count made their way onto cruise ships and airplanes to hang in middle-class living rooms as a reminder of a few days' holiday in the tropics. But these photos were different.
Jorge Provenza, whoever he was, had used light like a paintbrush and his camera lens as his canvas. What might have been a trite picture of a lone flamingo at sunset in less imaginative hands had become through Jorge's eye an abstract shape emerging from flame-colored water. No sky, no trees, just barely ruffled water and that distinctive silhouette.  This would be a perfect gift for Elke. Susan leaned closer. Damn. Not for sale.  She would have to keep looking.
Susan’s drive back home across the island gave her time to think about the young woman she had just left.  Mona seemed mature and confident, yet she had let herself be coerced by Jack Spencer to be his ornament, his property for years.  What could be lacking in her that kept her from running away from the little martinet?  She would have to see about getting Mona involved in the Art League while they were here on the island.  A few nights in the company of the Tsarina and her cronies and even the most timid of women would change.

(I don't know what's up with the line formatting of the novel part tonight.)  It felt weird this morning to realize when I was writing down the day's to-dos in my bullet journal that I really didn't have anything I needed to do today.  I was kind of stuck for a minute, then I picked up my knitting and started filling the time.  I got the hose timer set so that I don't even have to remember to water the garden although now that I think of it, I want to get out the balanced fertilizer and sprinkle some on the bales, just to give my plants a little welcome-to-the-bales boost.  I can do that tomorrow and have something to check off my to-do list.
--Barbara

More and more information is coming to light about Super Nintendo World thanks to its official website launching
January 09, 2021

Garden superstitions are as common as the weeds that grow around your plant
January 09, 2021